Looking for a multifaceted public school somewhere between Virginia, Maine and Ohio? The College of New Jersey is an excellent bet, according to U.S. News & World Report’s latest annual rankings.

TCNJ found a place near the top of the list of Best Regional Universities category for the northern region of the country. Moving up in rank from last year (fifth to fourth), the 2011 edition ranks the College as the number one public and fourth overall school in the standings among both public and private institutions in its category. TCNJ is the only public school in the top 10.

The full list of rankings can be found at www.usnews.com/college

According to U.S. News, the 572 schools that make up the Best Regional Universities category offer a full range of undergraduate degree programs and master’s degree programs, but few, if any, doctoral programs. TCNJ ties with Villanova University for the highest average freshman retention rate, 95 percent, and has the third highest graduation rate, 85 percent (a one percent increase from last year’s ranking), among schools in the northern region. The College also has the highest percentage, 92 percent, in the region of incoming freshmen that ranked in the top 25 percent of their high school class.

What’s more, for the third consecutive year and since the ranking’s inception, the College earned a spot in a select group of “Up-and-Comers” for regional universities in the north. The ranking was based on a survey of college administrators who were asked to nominate institutions “they think have recently made the most promising and innovative changes in the areas of academics, faculty, student life, campus or facilities.” Other schools on this list include Wagner College (#1), Quinnipiac University (#2), Arcadia University (#3), and Loyola University (#5).

This year’s report marks the College’s highest-ever standing among regional universities, and the 19th consecutive year that it has placed as the top public college in the northern region (since 1993). 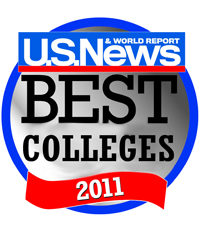