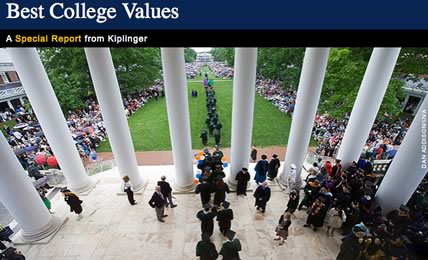 EWING, NJ …The College of New Jersey is ranked at #23 of 100 public colleges in Kiplinger’s Personal Finance Magazine. The ranking, which appears in the February issue of the magazine, is part of Kiplinger’s annual report on the Best Public College Values. The print magazine hits newsstands on Tuesday, January 5.

Of the three total New Jersey public institutions that made the list for 2010, TCNJ ranks the highest. Other New Jersey schools on the list are: Rutgers University (#48), Ramapo College of New Jersey (#49).

Selected from a pool of more than 500 public four-year colleges and universities, schools in the Kiplinger 100 were ranked according to academic quality, including admission and retention rates, student-faculty ratios and four- and six-year graduation rates, as well as on cost and financial aid. The complete article, including rankings, methodology, and other specifics are available now at: www.kiplinger.com/reports/best-college-values//.

This ranking comes on the heels of the U.S. News and World Report’s survey, which has ranked the College as the top public institution in the north in the ‘Top Universities—Master’s’ category of the survey consistently each year since 1993. The College was also recognized as one of the nation’s 75 most competitive colleges in a 2009 Barron’s ranking.