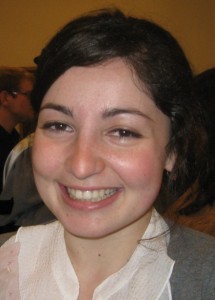 Freshly off of her induction into both Phi Kappa Phi and Phi Beta Kappa honor societies, the good news and recognition kept rolling in for TCNJ senior Esther Tetruashvily last week as she received word that she was selected for a Fulbright award. Esther, double majoring in English and international studies with minors in central Eurasian studies and Spanish, will be heading to Azerbaijan next year.

Esther traveled to Central Asia in May 2010 on a Maymester Tour directed by her mentor, Jo-Ann Gross,  along with Cynthia Paces, both professors of history at TCNJ; some of the photographs she took during that tour are on display in the Atrium of the Social Science Building. Following the Maymester Tour, Esther completed an internship in Moscow with the International Organization for Migration–Moscow Branch, and volunteered a non-profit, Fund Tajikistan, an organization working on migration policy in Russia and the former Soviet Republics.

This year at TCNJ she has also been working closely with Harriet Hustis, associate professor of English, studying Dostoevsky. Benjamin Rifkin, dean of the School of Culture and Society, has also worked closely with Esther. A heritage speaker of Russian, Esther has been working with the dean to improve her Russian in two independent study courses over the course of the current academic year. She has worked to perfect her own language skills as well as those of her peers by serving as one of the conversation hour leaders for first-year Russian course this year. Currently, she is reading scholarly works on migration policy in the Russian Federation … in Russian. After her Fulbright experience, Esther plans to pursue a graduate degree in Russian and Central Asian Studies.