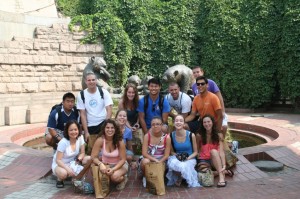 EWING, NJ— This summer, The College of New Jersey’s School of Business sent 12 students to China for a two-week tour. The tour was part of the new summer study course titled “Doing Business in China,” which provided interested students with a hands-on opportunity to learn about the world’s second-largest economy.
From June 12­­–25, the students visited Beijing, Shanghai, Hangzhou, and Suzhou, while conducting market research for two New Jersey small businesses interested in doing business in China. The course was made possible by a two-year Business and International Education (BIE) grant from the U.S. Department of Education.

“Everyone knows China has become the second largest economy in the world and more importantly it’s not just a political and economic relationship, but a business relationship. As the income level in China increases, it presents a lot of opportunities to American and New Jersey companies to do business,” said Lynn Tang, associate professor of international business and finance, who taught the course. 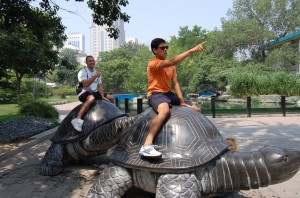 Tang, who wrote the grant proposal and is co-directing the grant program with Qin Shao, professor of history, is passionate about raising awareness of China among students at the College.

“Doing Business in China” is not the grant’s only new addition to the College’s academic offerings on China. The program began this past spring semester with the introduction of two new classes that offered students an introductory look at Chinese culture. Jia-Yan Mi, professor of Chinese, taught “Business Chinese for Beginners,” while Shao taught “Post-Mao Reform and Contemporary Culture in China.”

Prior to leaving for the tour of China, Tang’s students met at the College for two weeks to conduct market development research for Dock 7 Materials Group, a recycling company, and Laureate Biopharma, a pharmaceuticals company. After researching what products and services these New Jersey businesses offered, the students went abroad. They assessed what similar products and services are currently available in China and evaluated the potential for the firms to see their products there. 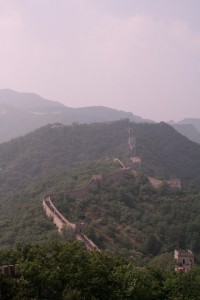 “Most of the case studies showed that in order to succeed in China you need to first understand the culture there and how this comes into play when doing business.  I think there is a huge market for the pharmaceutical, automotive, and energy industries since these have proven to grow at such high rates and the demand for them will continue to rise in the coming years,” said Anne Marie Pino, senior economics major.

The class, which was open to all students, offered guided excursions to the Forbidden City, the Great Wall, the Shanghai Stock Exchange, and Suzhou Industrial Park, among other areas. The trip also included five business meetings, with American entrepreneur Devon Nixon, grandson of former president Richard Nixon, and business people working in China.

Shopping was also on the agenda, offering the students a hands-on opportunity to practice their negotiation skills.

“They were really able to practice their haggling skills in China… A lot of them got better deals than I could,” joked Tang.

While students stressed that the wealth disparity in China was still vast and were surprised by the media’s one-sided portrayal of China as a booming economy, many of the students expressed increased interest in working in China in the future. 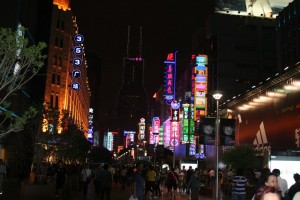 “Beijing and Shanghai felt like New York due to the copious amounts of Starbucks, BMWs and McDonalds.  I was a little surprised by the display of wealth in Beijing and Shanghai, I had to keep reminding myself that the majority of Chinese were still struggling. It’s clear though that the business elite in the major cities are doing exceptionally well,” said Kaitlin Saltzer, senior self-designed religious studies major.

“Many people have the idea of China as a place to outsource manufacturing but truthfully many businesses have all phases of their operations there,” said Jillian Reif, senior international business major. “I really do see Asia as a feasible part of my future career as a result of my class.  At my internship my boss was really interested in my trip, because our company has a small office in Malaysia that does business to China. He indicated if there is an opportunity and I continue to work here, after I graduate he would gladly consider sending me to that office for a few months after I graduate.”

According to Tang, two TCNJ students are already doing internships in China right now as a part of their study abroad experience, thanks to financial aid afforded to them by the grant. For the past year, Maryan Escarfullet, senior self-designed Chinese Language and Culture Studies and history double major, has been working as a translator for a non-profit that builds villages in rural China, attracting money from donors overseas, while Robert Mercer, senior psychology major, has been working at SpaWash, a new Shanghai laundry company.

The business school plans on hosting a symposium on China in spring 2012, where the students will recount their research and study experiences in China. Invitations will be extended to business people as well as interested students and faculty.

To learn more about the class’s trip to China, you can read Saltzer’s blog at http://bie.pages.tcnj.edu/.