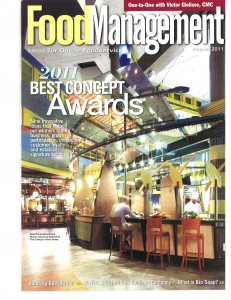 The winners of Food Management’s 2011 “Best Concept” awards competition — which pitted the College’s dining hall against 150 other entrants from colleges, universities, hospitals, and business accounts — will be honored at a ceremony in Dallas at the annual IDEAS Conference this week, Sept. 26-28.

According to the magazine, The Atrium at Eickhoff’s renovation is the product of a $5.8 million two-phase project, updating a 1992 traditional tray-line service cafeteria to better serve modern students.

“Eickhoff has increased transactions by 29 percent and sales nearly 22 percent (over $1 million) since the opening of the new facility,” the magazine’s editors noted. “The facility has enhanced consumer engagement from the students, faculty and staff on campus and has been instrumental in boosting voluntary meal plan purchases by over 17 percent. The renovation was recognized for its spectacular colorful design and its selection of vibrant serving stations—a transformation engaging all senses.”

This past summer, The Atrium at Eickhoff received national recognition with a feature in Nation’s Restaurant News.

The Student Government offered congratulations and appreciation to Karen Roth, director of TCNJ Dining Services, and John Higgins, general manager of dining for Sodexo at its Sept. 14 meeting. Roth and Higgins accepted on behalf of their staff members.

John Higgins, general manager of dining services, told the students gathered at the meeting that training to improve the skills of employees, hiring chefs in Eickhoff and raising the standards of food preparation and freshness has resulted in an increase in the students’ overall satisfaction.

Sodexo won the bid to be the College’s dining service four years ago, according to Higgins.

For more information on The Eickhoff Atrium and dining services at the College, and to see photos of the newly-renovated dining facility, please visit www.tcnjdining.com.