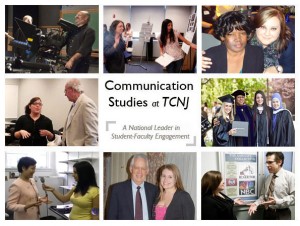 EWING, NJ … TCNJ Communication studies students have triumphed recently at international, national, and state levels. Carolina Chica ’12 (West New York), majoring in both communication studies and Women’s and Gender Studies,  learned in mid-April, 2012, that she has been selected as a US Fulbright Scholar to teach in India next year. Carolina is the second communication studies major to win that honor, earned previously by Charles Restrepo for work in Korea.  Carolina learned to teach English as a second language through a “Sesame Workshop” and spent a semester abroad in Cairo.  Indeed, her achievements and volunteer work on behalf of Oxfam, TCNJ’s Center for Global Engagement, and the communication studies department earned her the highest honor offered a junior by faculty, the “Promise of Achievement” award. Admitted to Phi Beta Kappa and Phi Kappa Phi as a senior, Carolina is the lead author of a refereed paper on “Nationwide Coverage of Latino Immigration: A Community Structure Approach” presented at the annual conference of the National Communication Association in New Orleans, November, 2011.

Whether comparing coverage in multiple metropolitan areas in the US or in capital cities in a wide range of nation-states across the world, all student co-authors used a “community structure approach”, reversing traditional scholarly interest in the impact of media on society to focus on a reverse perspective: the impact of society on media.  The “community structure” approach examines links between urban or national demographics and reporting on political and social change and has been featured recently in a special scholarly collection of articles in the November/December, 2011, issue of a leading journal, “Mass Communication and Society”.  All student papers were written for a summer MUSE project (on coverage of AIDS in four Sub-Saharan African countries) coordinated by Pollock, D’Angelo and Shaw, or classes in communication research methods or international communication taught by Pollock.