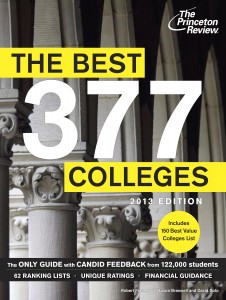 Ewing, NJ … The College of New Jersey is one of the country’s best institutions for undergraduate education, according to The Princeton Review. The education services company, which is not affiliated with Princeton University, features the school in the new 2013 edition of its annual college guide, The Best 377 Colleges. TCNJ also was selected as having one of the top libraries in the country.

Only about 15 percent of America’s 2,500 four-year colleges and three colleges outside the U.S.A. are profiled in the book, which is The Princeton Review’s flagship college guide. It includes detailed profiles of the colleges with rating scores for all schools in eight categories, plus ranking lists of top 20 schools in the book in 62 categories based on The Princeton Review’s surveys of students attending the colleges.

Says Robert Franek, Princeton Review’s Senior VP / Publisher and author of The Best 377 Colleges, “We commend TCNJ for its outstanding academics, which is the primary criteria for our selection of schools for the book. Our choices are based on institutional data we collect about schools, our visits to schools over the years, feedback we gather from students attending the schools, and the opinions of our staff and our 30-member National College Counselor Advisory Board. We also work to keep a wide representation of colleges in the book by region, size, selectivity and character.”

In its profile on the College, The Princeton Review praises the school for its “dedication to education and to pursuit of passions, all at an affordable price” and quotes extensively from TCNJ students the company surveyed for the book. Among their comments about their campus experiences there: “TCNJ is a community unlike any I have ever been a part of; everyone is proud to be a part of and to contribute to the TCNJ culture.”

TCNJ is also ranked No. 14 on the list of “Best College Library” in The Best 377 Colleges.

In a “Survey Says” sidebar in the book’s profile on the College, The Princeton Review lists topics that TCNJ students surveyed for the book were in most agreement about in their answers to survey questions. The list includes: “great library,” “low cost of living,” and “popular student publications.”

The schools in The Best 377 Colleges also have rating scores in eight categories that The Princeton Review tallies based on institutional data collected from the schools during the 2011-12 academic year and/or its student survey for the book. The ratings are scores on a scale of 60 to 99 (the highest attainable score) and they appear in each school profile.  Rating categories include: Academics, Admissions Selectivity, Financial Aid, Fire Safety, and Green, a measure of school’s commitment to the environment in its policies, practices and education programs. Among the ratings in the TCNJ profile are scores of 85 for Quality of Life, 93 for Fire Safety Rating and 84 for Green Rating.

The Princeton Review has posted the school profiles and ranking lists in The Best 377 Colleges at www.princetonreview.com at which users can read FAQs about the book, the survey, and the criteria for each of the ratings and rankings.