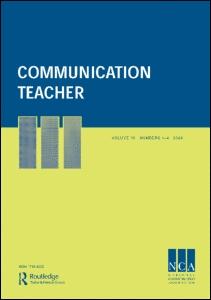 Communication Studies professor John C. Pollock was given the annual “Distinguished Educator” award on Friday, August 10, 2012, by the Mass Communication and Society (MCandS) Division, the largest subunit of the Association for Education in Journalism and Mass Communication, at the latter’s annual conference in Chicago August 7-12, 2012. The Distinguished Educator award is the highest honor awarded annually by MCandS to those who have had a significant effect on communication pedagogy through excellence in teaching and mentorship.

Presenting a plaque for the award, Teaching Award Committee co-chair Jay Hmielsowki cited Pollock, a professor for 20 years at TCNJ, for several contributions:

Summarizing his remarks, Hmielowski praised Pollock for the “trust, admiration, friendship, even love he inspires in his students,” adding that “Your record as a teacher and scholar is one that I (and many other assistant professors) will model as we move forward with ou­r careers.”

In his formal presentation on teaching during the MCandS Division’s Promising Professors Workshop, Pollock posed two questions guiding him to write an article on his pedagogical philosophy in Communication Teacher (22:1, January, 2008). How can we help students experience the commitment, high purpose, and deep satisfaction experienced in bringing a complete research project to professional level of excellence? How can we close the enormous intellectual distance between standard short exercises (essay or exams) in traditional class work and more thorough, literature rich, meticulously analyzed, issue-oriented work of scholars? Pollock then outlined the four key components of his “communication commando model” designed to create a “research culture of excellence”:

Thanking the Mass Communication and Society Division for the award, Pollock expressed appreciation to his highly motivated students over his 20 years at TCNJ, to his colleagues both inside and outside the Department of Communication Studies and to his own devoted mentors in college and graduate school.