EWING, NJ … The College of New Jersey has been named to Kiplinger’s Personal Finance’s list of 100 best values in public colleges for 2012-13. The ranking cites four-year schools that combine outstanding education with economic value. 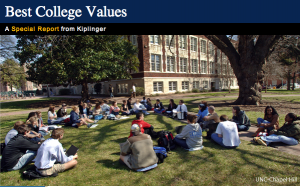 Kiplinger’s assesses quality according to a number of measurable standards, including the admission rate, the percentage of students who return for sophomore year, the student-faculty ratio and the four-year graduation rate. Cost criteria include low sticker prices, abundant financial aid and low average debt at graduation. Many schools have appeared on the list multiple times—TCNJ included—a testament to the consistent value these colleges provide.

“We applaud this year’s top 100 schools for their efforts to maintain academic standards while meeting the financial needs of their students,” said Janet Bodnar, editor of Kiplinger’s Personal Finance.

The annual public school rankings appear in Kiplinger’s February 2013 issue—on newsstands January 1, 2013—and online now at: www.kiplinger.com/links/college. Web visitors will find special features, including an FAQ about how the public colleges are ranked, a slide show of the top ten schools, and a tool that lets readers sort by in-state and out-of-state cost, average debt at graduation, and admission rate. In addition, Kiplinger’s top 200 private colleges and universities of 2012-13—announced in November 2012—are featured in the Best College Values report.

For nine decades, the Kiplinger organization has led the way in personal finance and business forecasting. Founded in 1920 by W.M. Kiplinger, the company developed one of the nation’s first successful newsletters in modern times. The Kiplinger Letter, launched in 1923, remains the longest continuously published newsletter in the United States. In 1947, Kiplinger created the nation’s first personal finance magazine. Kiplinger.com is the fastest growing Web site in the personal finance space. Located in the heart of our nation’s capital, the Kiplinger editors remain dedicated to delivering sound, unbiased advice for your family and your business in clear, concise language. Become a fan of Kiplinger on Facebook or Kiplinger.com and follow Kiplinger on Tumblr and Twitter.