Throughout college, sociology major Lea Chin ’14 used her summer breaks to travel the world. She taught English at a school in China and traveled to Nicaragua with TCNJ’s Foundation for International Medical Relief of Children club. She lived and worked in a Malawian orphanage, explored Brazil, and became a certified yoga teacher in India.

Now Chin is preparing for her biggest adventure yet: a two-year Peace Corps deployment to Vanuatu that starts in January. The South Pacific island nation is more than 8,000 miles from her home in East Brunswick, N.J., but Chin says she’s ready for the trip—even if she ends up in one of the Peace Corps’s most remote sites.

“There’s no running water, no electricity, and some volunteers have said you have to walk a few hours to get cell-phone service,” Chin says of Vanuatu’s outer islands. “Right now that sounds exciting. Then again, it’s just an idea to me. But if we get to choose, I’d like to choose a rural and remote location.”

Chin first visited the South Pacific as a TCNJ study-abroad student in Fiji. “It was amazing—a tropical paradise with a cool culture and friendly people,” she says. “I still miss it every day. I’m hoping Vanuatu will have a similar relaxed, island-time vibe.” 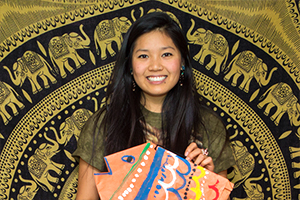 As a Peace Corps volunteer, Chin will teach English to secondary-school students in Vanuatu. (Bislama, the predominant language on the outer islands, has roots in Creole and pidgin.) “The one summer I went abroad and didn’t do any volunteer work, it just didn’t feel right,” she says. “With teaching, you can make a difference for these kids and let them know that someone cares. I want to be that person for them.”

From travel-and-volunteer trips to the globally focused courses she took as a sociology major, TCNJ “absolutely prepared me for the Peace Corps,” Chin adds. “They said I was one of the younger applicants, and I don’t think I would have been accepted without all my previous experiences.”

As for life after Vanuatu, Chin isn’t sure which path she’ll follow. But there is something she’s always dreamed of: opening an orphanage abroad.