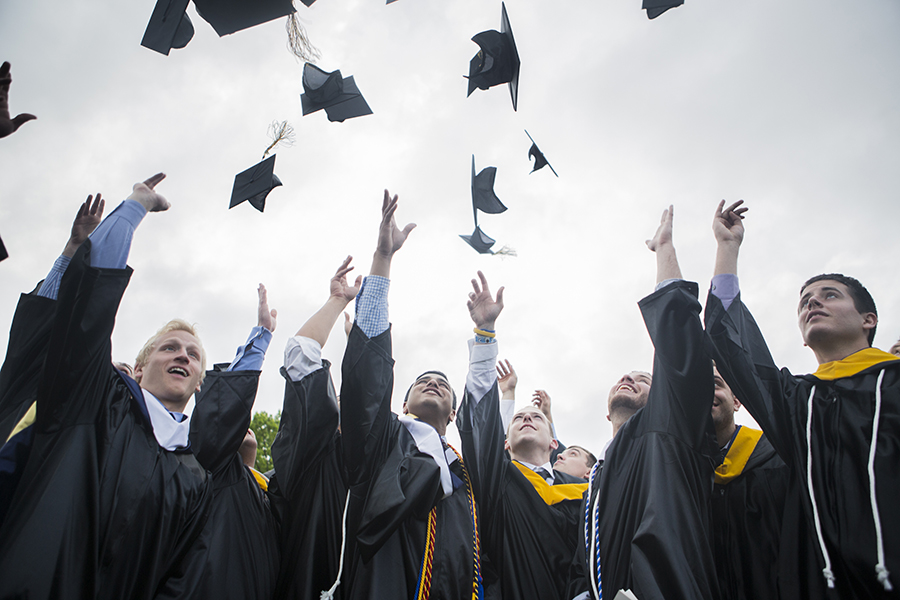 We asked members of the Class of 2015 what is perhaps the single most terrifying question you can ask a graduating senior:

“So, what are you doing after graduation?”

Here’s what lies ahead for 59 of them:

She’s already working as a data analyst in the Asset Forfeiture Division of the Drug Enforcement Administration headquarters in Arlington, Virginia.

“I’m currently building an athletic apparel brand for competitive indoor beach volleyball players.” The brand—Brenwal—is named after the street in Ewing that was home to the off-campus TCNJ volleyball house.

He’ll also start a position as an analyst at CIT Group, Inc.

He’ll attend University of Pennsylvania Law School in the fall.

He’s heading for the Peace Corps, where he’ll volunteer as a math teacher in Tanzania.

He’ll go north to Yale for a PhD in biology with a concentration in physical and engineering biology.

She’s off to Senegal as a Peace Corps Health Extension volunteer.

She’ll work with Good Shepherd Volunteers as an independent living consultant for individuals who have aged out of foster care.

She’s off to Boston University for her master’s degree.

He is starting a solar energy technology company—Solar Divide—focusing on developing technologies to increase the efficiency and output of large-scale solar farms.

Stephanie Gates, history
“Doing some soul searching by way of music festivals and road trips. Then, fingers crossed, I am able to obtain a position as a history teacher!”

will work for one of these companies: Bank of America, Bloomberg, Deloitte, EY, Goldman Sachs, JPMorgan Chase, Johnson & Johnson, KPMG, PricewaterhouseCoopers, Target, and WithumSmith+Brown. (Current as of May 8, 2015)

She is entering a PhD program in chemistry at Johns Hopkins.