At each women’s lacrosse match this spring, junior Elizabeth Morrison will be sporting a red, white, and blue, stars and stripes bandana. The stick she wields is painted our nation’s colors to symbolize her patriotism—a fine complement to TCNJ’s blue and gold.

Morrison returns to the Lions this season after earning the 2016 IWLCA National Defensive Player of the Year award as a sophomore.

There will be plenty to live up to in 2017, as the bar was set sky-high last spring. All seven spring sports advanced to NCAA championship competition with women’s lacrosse leading the pack, appearing in the regional championship final and posting a 20-2 overall record. TCNJ is currently ranked fifth in the national polls and will take on the defending national champion Middlebury College in Lions Stadium on Monday, March 27 at 7 p.m.

Men’s tennis opened its season with three home matches this past week. They will continue a top-heavy home schedule, hosting seven straight events beginning Saturday, March 11 against Colby College at noon. Women’s tennis won its 34th consecutive New Jersey Athletic Conference championship this past fall and will battle elite competition this spring in preparation for the 2017 NCAA national tournament.

The softball team was one win away from advancing to the NCAA Super Regionals last year and looks to return this season. TCNJ baseball posted a 32-12 mark in 2016 and is determined to make it two straight appearances in the NCAA tournament.

The Lions track and field program is packed with talent. They are still competing indoors and will host outdoor invitational meets on Saturday, April 8 and Saturday, April 28.

For more information on each program, visit tcnjathletics.com

On Saturday, April 22, TCNJ baseball will host Military Day. The annual exhibition showcases the program’s appreciation toward members of our TCNJ extended family who have served to protect and defend our country. The TCNJ Army ROTC presents the colors, and between each inning, veterans and those on active duty who have an association with the college are recognized. That list of individuals includes former TCNJ President Dr. Harold W. Eickhoff, who served in the U.S. Navy from 1948–1952. 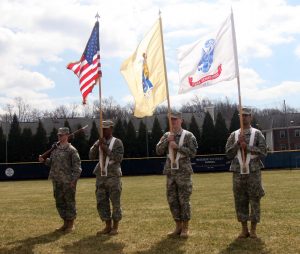