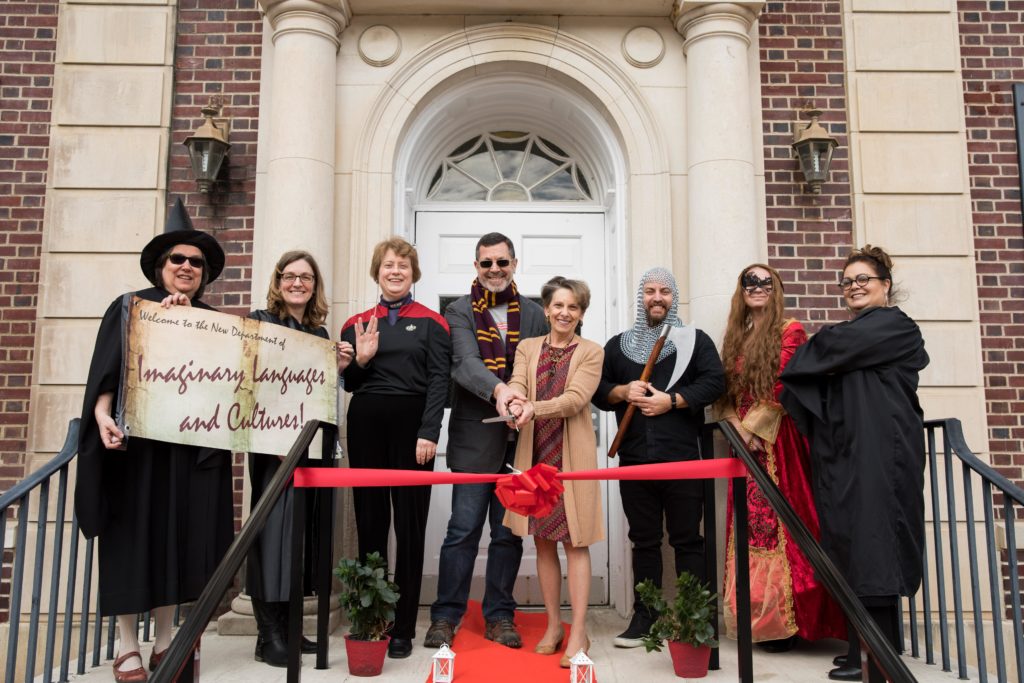 In a groundbreaking transformation of its commitment to the study of contemporary society, The College of New Jersey announced today that beginning in fall 2019, the Department of English will become the nation’s first Department of Imaginary Languages and Cultures.

“Over the past decade, we’ve seen an astonishing growth in the number of students coming to the English Department to study J.R.R. Tolkien, Harry Potter, Black Panther, and many other texts that, ideally, involve the mastery of imaginary languages, such as Elvish, Klingon, Khazdul, or Dothraki,” Professor Glenn Steinberg, the current department chair, said. “We’ve come to realize that virtually every one of our faculty members has become fluent in at least one such language over their careers, and, simply put, we’ve already taught enough Chaucer, Shakespeare, Milton and Faulkner to last a lifetime.” Professor Steinberg added that he will continue as acting chair for the 2019-2020 academic year, although his new title will be Arthur Weasley Muggle Professor of Imaginary Literary Studies.

Professor Jean Graham, the current associate chair, who will become the new department’s first professor of Klingon and related languages, chimed in: “My Bajoran name is Tahna Celes, which means ‘touched by the prophets.’ My courses will include an FSP called ‘Don’t Call Me Pooj: How Not to Offend a Klingon,’ STK 345, The Klingon Epic, and I’m particularly interested in the interdisciplinary opportunities of STK/PHL 423, Vulcan Literature and Philosophy.”

For some professors, the transformation of the department is part of a evolution of their professional identities. “As Hrothgar, Master of Dwarvish Studies,” said Jess Row, current director of creative writing, “I can be open in the classroom for the first time about being dwarf-identified.” Row added that one of his course offerings in spring 2020 will be “Nobody Tosses A Dwarf: The Dwarf-Hero in Comparative Perspective.” Diana Moon Goddess, formerly known as Diane Steinberg, an expert on aquatic and oceanic literatures, will use the College’s swimming pool to teach Intensive Mermish, which, according to the course description, “can be spoken, sung, or gurgled.”

Other courses offered in the 2019-2020 academic year include “Curses, Spells, and Hexes Around the World,” “Otakus and Otherness,” “World of Warcraft as Utopian Polity,” “Vibranium, Kryptonite and Mithril: Fantasy Metallurgies,” and “Cosplay Subcultures in Comparative Perspective.”

On March 13th, TCNJ’s President, Kathryn A. Foster, attended a celebration of the new department in Bliss Hall. For the ribbon cutting, President Foster used a sword that Felicia Sackville-Steele, Professor of Quenya, cryptically described as “having appeared in the moonlight, rising out of Lake Ceva,” referring to one of the two lakes on TCNJ’s campus.

“I’m thrilled that TCNJ’s English Department has made this groundbreaking transformation,” President Foster said. “The new Department of Imaginary Languages and Cultures stands on the cutting edge of new developments in cultural and linguistic studies, and what’s more, it offers a way for our dedicated faculty to embrace and celebrate their authentic selves,” she added, while edging away from Hrothgar’s axe. She added that she hoped Professor Steinberg would no longer insist on opening academic meetings by waving his wand and muttering cryptically under his breath, even though muttering cryptically under one’s breath is an important expression of imaginary language and culture.

“There’s been so much discussion over the past two decades about the declining role of the humanities and the loss of academic jobs in English and literature,” commented Professor Steinberg. “But there’s no lack of positions in the Antarean Starfleet Academies, or among the Rune-Lords of Asgaard, at the Wakanda National Research Laboratories, or indeed, at Hogwarts, where the Defense Against the Dark Arts position is vacant every year. As the world’s first imaginary English Department, we advise our students to skip MLA and go straight to Comic Con.” “Or, as we say in Khuzdul,” said Hrothgar, “Atatha U’dran! It’s about time.”