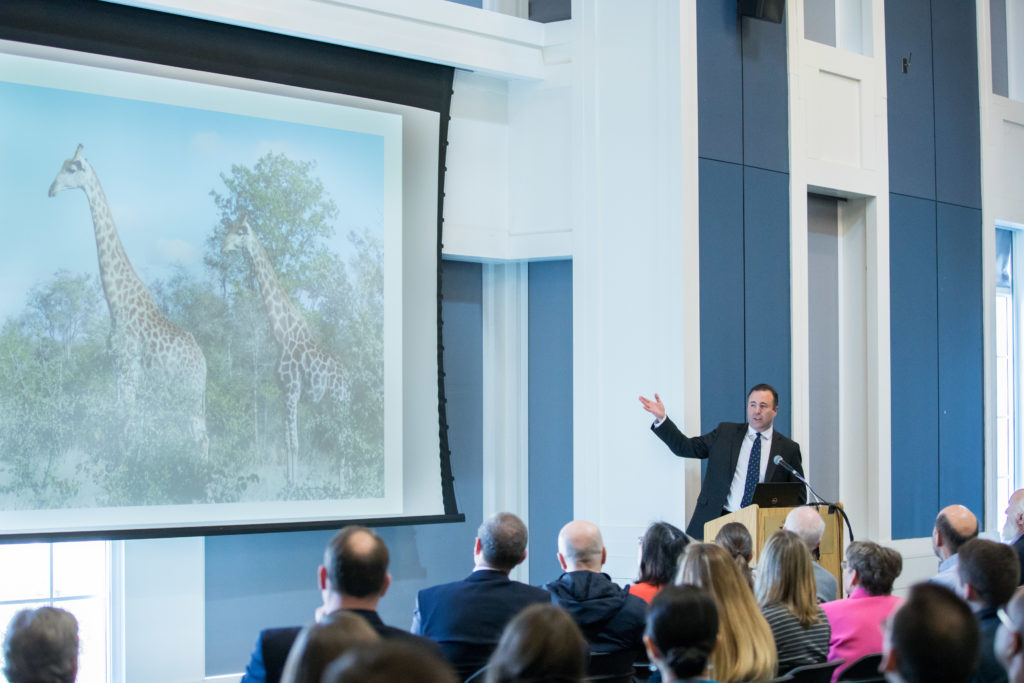 With the support of the Gitenstein-Hart Sabbatical Prize, associate professor of history Matthew Bender capped off a chapter in his career with the completion of his book, Water Brings No Harm: Knowledge, Power, and the Struggle for the Waters of Kilimanjaro, published by Ohio University Press in April 2019. On March 27, Bender shared with the campus community his findings about the politics of water resources on the dormant volcano in Tanzania.

“I’d like to say I spent my sabbatical scourging through the African plains,” he said, pointing to a picture he had taken of two giraffes out in the wild. “But instead I spent my time here,” he finished, showing a picture of his home in Ewing, New Jersey.

Bender explained that while he spent most of his sabbatical writing his new book, he spent over 15 years working on the slopes of the mountain gathering research.

It began when he was an undergrad, when his academic dean bought him a ticket to Kenya during his senior year. That was the start of a series of firsts, he explained: the first time he traveled by himself, the first time he was considered a minority, and the first time he considered his privilege. As he studied there, he wondered why Americans knew so little about African history.

During his sabbatical research, he learned that 2.7 billion people worldwide suffer from water scarcity, and two-thirds of the world’s population may face water shortages by 2025. Bender attributes the problem to insufficient economic resources. These insufficiencies exist not only in developing countries in Africa, but right here in the U.S. in places like California.

Bender says we must focus on how communities have dealt with water management in the past, and learn from their successes and mistakes. Water management is the focal point of struggles between The Chagga — the communities of people who settled on Kilimanjaro — and outsiders, like missionaries and priests.

Though he ends on a hopeful note, suggesting that the solution to the problem is to include local communities in water management processes and treat them as partners in enacting change.