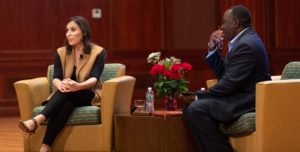 Jackson, who grew up not far from campus in Yardley, Pennsylvania, and who claims to have the biggest unicorn figurine collection on the east coast, now works overtime “writing the first draft of history” as she tracks down President Trump, gabs on the TODAY show, and hosts MSNBC Live.

Here’s some news you can use on your own path to success, from Jackson:

Jackson says research is the fundamental underpinning of journalism. But being curious, and asking questions are good habits for any career. “Be relentless in your pursuit of answers to your questions,” she says.

As a young reporter, Jackson headed to Maryland and covered local stories about chicken farms. She’s been on the outskirts of Los Angeles to report on wildfires and natural disasters. Covering the campaign, she got to see rural America and experience things she never could have imagined. “I wouldn’t trade those experiences of working out in the country for anything,” she says. “Getting out of your bubble is super important.”

“I am very aggressive about seeking feedback and asking people I work with what I can do better,” she says. Jackson admits it is tough to turn off your defense mechanism when being criticized. “It’s going to hurt, it’s going to sting, but that’s the way to improve.”

If on a path that doesn’t feel authentic, find another path.

Jackson says college is a great time to experiment and figure out what it is that you like to do. But it’s OK if you only do it for a little while. “We never know what’s coming around the corner,” she says.

Jackson’s campus visit was arranged by Janice Sellinger, an adjunct professor of communications studies and vice chairman of the Foundation of the National Academy of Television Arts and Sciences. Maurice Hall, dean of arts and communications, moderated the discussion as part of a series of guest lectures meant to be TCNJ’s version of Inside the Actor’s Studio.