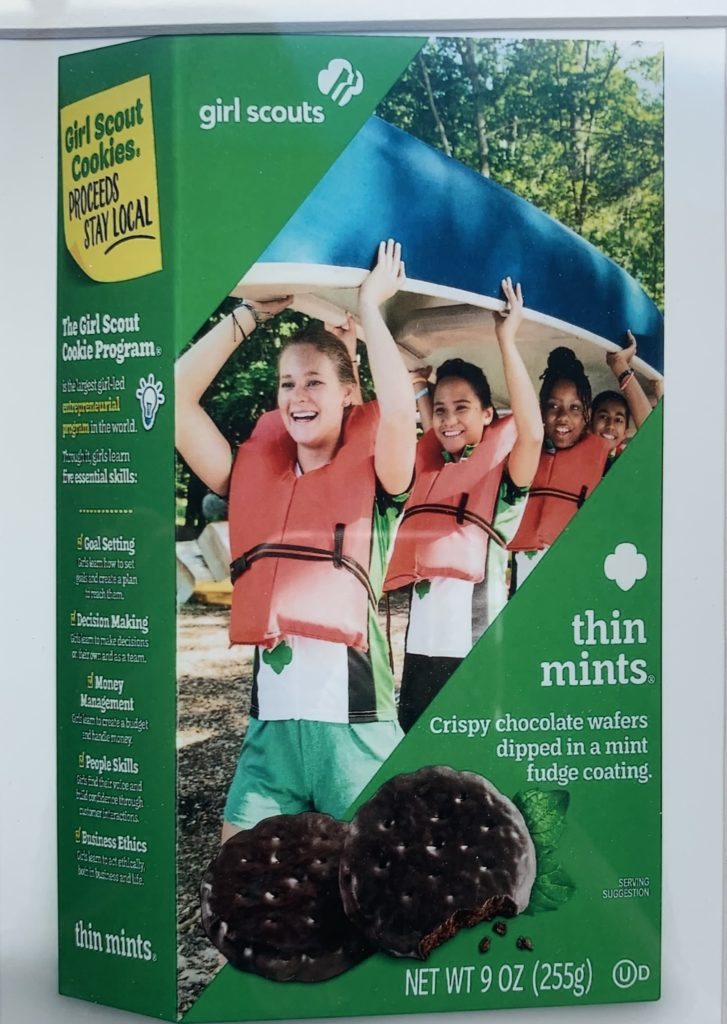 And it’s not just any cookie — Christel is one of four young women featured on the packaging for the iconic Thin Mints, the top selling treat in the organization’s annual fundraiser that accounts for a quarter of all sales — a whopping 50 million boxes.

Long active in the Girl Scouts in her hometown of Montclair, New Jersey, Christel was helping out at a photo shoot with current top-cookie-selling scouts when she was recruited into the scene. She appears third in a row of girls portaging a canoe.

“I’m so honored to be on the box, it’s surreal to see yourself, especially on Thin Mints,” says Christel, an ROTC Cadet at TCNJ.

The box redesign — the first in 10 years — was kept under wraps until recently. The cookies are now available nationwide.

Her mom, Stella O’Hara, is a longtime troop leader and Christel was involved in Brownies and Girl Scouts for nearly 13 years, scouting well into high school, after other troop members had fallen away.

“I knew all the opportunities associated with it for scholarships and leadership,” says Christel. She worked at Girl Scout camp in West Orange and was able to travel with her troop to an environmental resource center in the U.S. Virgin Islands thanks to funds raised through cookie sales. She also earned the Girl Scout’s top silver and gold awards for exemplary community projects, including a wellness event she planned for health professionals at Mountainside Hospital in Montclair.

Christel received a $4,500 William and Ida Kiefer Memorial Scholarship from the Girl Scouts to support her first year at TCNJ.  She said she chose to major in nursing after spending time at the bedside of her mother, who had a kidney transplant when Christel was in high school.

The cookie box designs generally stay the same for a decade, so Christel will remain on the Thin Mints box for the foreseeable future. She’s thrilled, she says, but allows that her personal favorite cookies are the Samoas and Do-si-dos!