Humans produce about 300 million tons of plastic waste every year — nearly equivalent to the weight of the entire human population. Single-use plastic products like straws, cutlery, drink bottles, takeout containers, and bags make up half of this total.

Enter students in Karen Deaver’s First Seminar Program class, who collaborated with The Center for Community Engaged Learning and Research and local artist Lori Johansson to “upcycle” these single-use plastics for a new art piece in Brower Student Center.

The painting, divided into four staggered canvases, features an abstract image of a whale pod fleeing a polluted ocean to a distant clean oasis. 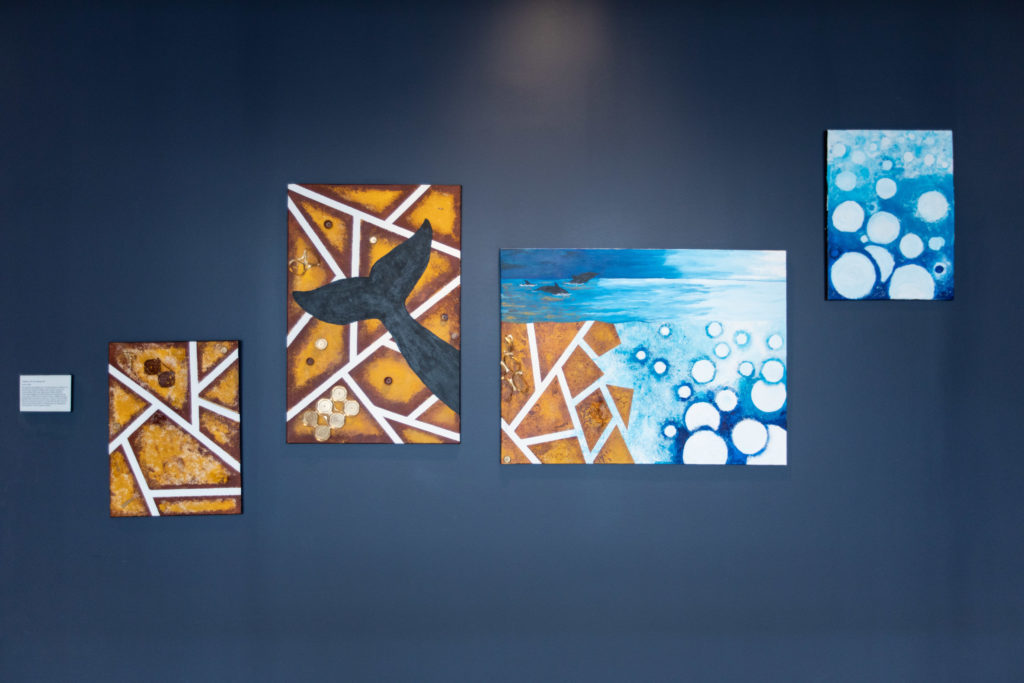 Deaver’s students collected non-recyclable plastics from their residence hall and used the materials to create the polluted oceanscape on the left two canvases. On the right two canvases, students used plastic lids to paint dreamy white bubbles, which symbolize a future where plastic no longer pollutes our oceans.

For Deaver, this project was a way to get her students personally involved in global issues. Her course, “The Arts as a Force for Social Change,” asks first-year students to get in touch with the social, environmental, and political issues that matter to them.

Of the 18 students in the class, only one was an art major. Deaver says her students felt insecure about their abilities at first but quickly became more comfortable as they worked with Johansson.

“Creativity is not a one-definition thing,” says Deaver. For her, art activism is not about inherent artistic ability — it’s about communicating a message of hope and change.

“Professor Deaver was the biggest drive to make this project happen,” says Victoria Winters ’23. “Once she opened up the doors for us to see how successful we could be and the kind of impact that we could create, I was set on making that change happen.”

Although the piece recognizes the urgency of environmental issues, its message is one of hope.

“The piece is meant to inspire action, moving away from a feeling of disengaged impossibility,” says Johansson, a Trenton-based multimedia artist who also heads up research and operations at TCNJ’s Center for Community Engaged Learning and Research.

“I’ve given numerous presentations in my time, but this one definitely was the most important to me and it was the best presentation I’ve produced so far in my life,” says Winters.

Both Deaver and Johansson want to inspire students to express themselves through art on campus. “I want to wake students up to see their own power and voice,” says Deaver. “It’s a way to give them agency that they can’t access only through writing papers and doing lab experiments,” says Deaver.