It was a small gesture for a professor who made the most of a difficult semester teaching remotely.

Logging in to his statistics class, Adam Shrager thinks he’s having technical difficulties when the usual Brady Bunch-style Zoom grid is blank. Then, nearly two-dozen students simultaneously appear in their video boxes — each holding a homemade sign thanking him for a good semester.

“Oh wow — that’s like the nicest thing ever!” says Shrager, taken aback. “Was that a thing or is it just for me?” 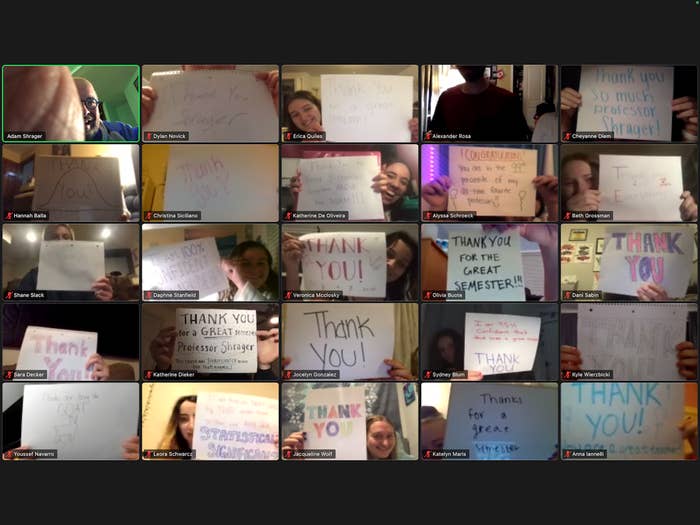 It was indeed, just for him — the brainchild of sophomore Katherine De Oliveira. But it soon belonged to the world after classmate Veronica McClosky (@VizzyWap) posted Shrager’s reaction on the video sharing app TikTok.

The minute-long video garnered nearly 5 million views in two days and was soon shared on other social media platforms. It spawned copycats and Shrager found himself fielding calls from Good Morning America, Today.com, Buzzfeed, USA Today and others.

Clearly the world was craving a simple moment of gratitude.

“This has been a whirlwind. Think about how beautiful this is,” says Shrager, an adjunct at TCNJ for a decade. “We live in a world of snark. I’m a New Yorker, I’m a snarky guy, but I’ve gotten messages from all over the world … In some way, for whatever reason, it captured people’s emotions.”

De Oliveira, in the second year of a master’s program in teaching, is happy that her “simple idea” gone viral showcased the college.

“If there is any video that would represent the spirit of TCNJ, it’s this,” she says.

He became a teacher after 9/11, leaving a job as a stock and options trader in Manhattan.  “I love every second of teaching, but it’s a lot harder than working on Wall Street!” he allows.

The pandemic has been particularly challenging as it was the first time he’s not been able to meet his TCNJ students in person.

“It’s been the hardest semester of all time, bar none,” says Shrager. “Somehow, in the face of insanity, we did form these relationships.”

His energy and skill as a teacher made the 80-minute class fly by, students said. Shrager integrated their lives into the remote realm: included passing siblings and pets in conversation, and made sure the class shared in a sunset from a classmate’s roof.

“Despite everything going on, Dr. Shrager kept us engaged every class,” says McClosky ’23, who filmed his reaction on her cellphone. “His dedication and love for the material he taught displays how much he cares about us and our success at TCNJ. The constant support from the professors at TCNJ is like no other.”